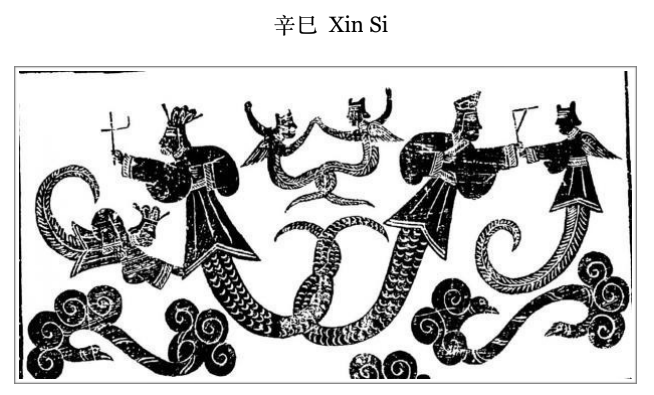 Xin Si (Yin Metal Snake) starts May 5th, 2020 and ends June 4th. 2020. The snake is a fire sign and marks the beginning of summer. Sitting on top of the snake this year is the element yin metal. This means we have a yang metal water rat year and a yin metal fire snake month.

The image of the golden snake can be a beautiful jewel shining in the summer sun or a shiny dagger! Although the snake is known for its beauty and elegance, it has a dark side that attracts secret agreements, secret actions, shady schemes, and a powerful desire to make things happen whatever the cost. It is interesting that we have had the metal element ruling for the last two months, and metal rules the lungs.

The fire and metal energy of the month are in an opposition cycle (fire melts metal) and this might help fuel the pandemic, but on another level may aid us in navigating the unknown. Yin fire is symbolized by candlelight and may offer us a spark of guidance at the end of the tunnel.

I love the ancient Chinese drawing above of Fuxi and Nuwa. They created humanity and were pictured as androgynous snakes – Fuxi holding a compass (to measure heaven) and Nuwa holding a square (to measure Earth, while contemplating the two ruling animals (rat and snake) this month, I realized how differently they are perceived in the West and the East. In the East, those wishing to pay a woman a compliment and acknowledge her beauty are accustomed to say: “My dear, you are a real snake!” — a pleasantry most likely to be misinterpreted in the West!! Likewise, the Chinese may call a person who is quick witted as being “shrewder than the Rat, while in the West, calling a person a rat means you don’t trust them.

We view these two animals negatively and are programmed to trap, kill or exterminate them while in The East they are regarded as food! Rats are purported to taste like pork (especially the big bamboo ones) and snakes to taste like chicken.

We only know the animal world analogically as it enhances our comprehension of the unknown in terms of the known. When reading newspaper reports of terrorists, many times our military is depicted as hunters going after the deadly enemy who scurries for cover or slithers away. We talk about trapping, snaring or netting these dangerous
unpredictable enemies.

In the West, we see these two animals as filthy vermin and poisonous vipers who invade our safe space. They are able to penetrate and move through places humans can’t and to survive and thrive invisibly.

Ancient people, worldwide, had high respect for the rat. They believed that the Rat could communicate with God to predict good or bad luck. The Rat was resourceful and could quickly react to natural disasters, such as earthquakes, flood, drought, or a plague of locusts, so it was considered to be a godly creature. The snake was seen as a healing presence. We are familiar with the snakes entwined around the caduceus – the sign of physician. The snake was the embodiment of wisdom and eternity, The value of these two animals has been reframed as we lost touch with nature
and moved so deeply into scientific materialism.

Metaphors of how we perceive and process the world have shifted through history and from culture to culture, I think we need to think about how the whole Covid 19 situation is being framed. Metaphorically, public officials and the main stream media are framing it as a war. Doctors are brave soldiers fighting on the front lines without sufficient ammunition, they are battling the enemy and people breaking the social-distancing rule are traitors and deserters. This constant use of war metaphors is reflective of a culture where war is the primary (only) reference point we have io describe a crisis. .We have wars on cancer, drugs, illegal immigration, crime,terrorists and now a virus..The whole pandemic needs to be reframed into something like a global health emergency, It gives it a more humanitarian tone which is sorely needed at this time.

Tomorrow is Wesak – Buddha’s birthday – and a super full moon! And tonight the annual Eta Aquarids meteor shower will be visible around the world. Appearing annually at the same time each year, the heavenly light show will last one week. In lower latitudes, The shower peaks at about a rate of around a meteor per minute. Eta Aquarid meteors enter the atmosphere at a particularly high speed, traveling at about 148,000 mph.

Fast meteors can leave “glowing” trains (incandescent bits of debris in the wake of the meteor) which last for several seconds to minutes. A great way
to welcome summer 2020.

The membership area now has the Auspicious dates for May, monthly Feng Shui updates, best personal directions according to you birthday Biogeometry emitters and more. There now are six videos with two more being added this month – one on Feng Shui Trigrams and the secret gates of the Bagua and one on Stone Medicine