March 2020 the month of the Yin Earth Rabbit/Hare 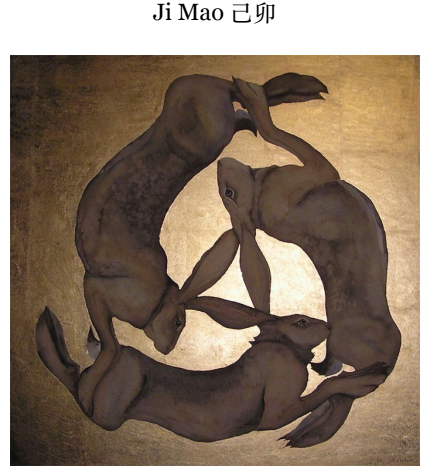 The month of March is always ruled by the rabbit or hare. It is an animal that epitomize gentleness, refinement, elegance and is rarely angry, hostile or aggressive. It is also are known for longevity, discretion and bringing good luck.

Since this month also brings the magical doorway of the Spring Equinox, I was reminded of the mysterious image of the three spinning hares. It is a fascinating circular motif or meme of creation appearing worldwide at sacred sites from the Middle and Far East to Africa to the churches of Europe.

The hares, which were considered androgynous or hermaphroditic until recently by most cultures, generally live alone. But there are certain times of the year when they congregate in mass (for unknown reasons.) One of these times is the Spring Equinox. It brings a certain energy and the hares go crazy – jumping and boxing! They become as mad as “a March Hare,” or the famous “Mad Hatter” in Alice in Wonderland.

They don’t build their homes in burrows like rabbits, but instead make little nests (like a bird nest) in the grass on the ground. Another oddity about the hares is they give birth to baby hares that are fully furred and have open eyes. The Mother builds a nest not only for herself, but one for each baby. From the day these babies are born, they are very self sufficient! END_OF_DOCUMENT_TOKEN_TO_BE_REPLACED

The Chinese New Year of the White Metal Rat begins January 25, 2020 and ends February 11, 2021. It ushers in a new day, a new year, a new 12 year cycle, and a new 60 year cycle. The Chinese celestial zodiac begins each cycle with the sign of the rat which is based on an approximate Jupiter orbit.

The rat is seen as a very special animal because it is half yin and half yang. He is designated as such because he has four fingers (yin) in front and five toes (yang) behind. Each animal rules two hours each day. The rat hour, however, crosses two days- from 11p.m. to 1 a.m., so he contains both late night and early morning energies – ending and beginnings.

Each part of a cycle is ruled by a celestial animal and one of the five elements – water, wood, fire, earth, and metal. 2020 is ruled by a yang white metal element (heaven) sitting on top of the rat (Earthly Branch.) The yang metal is connected to steel, armor, weaponry and strong wind. The rat is is the water element, but being a rat (yin/yang animal,) it contains yin water within and yang water without! In the zodiac, it is classified as a yang animal. END_OF_DOCUMENT_TOKEN_TO_BE_REPLACED 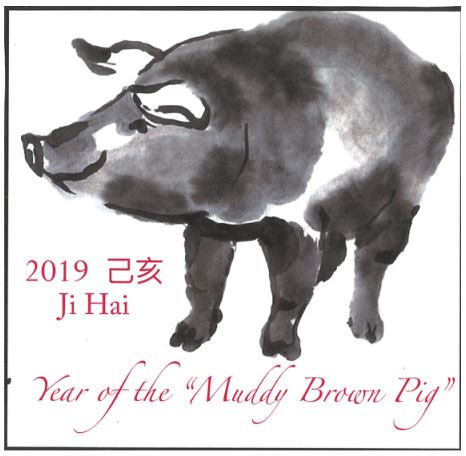 I am calling it the year of the “Muddy Brown Pig” because the two main elements are yin earth (soil) over water. The Yin earth sitting on the yin water Pig provides a very unstable foundation.

This pig is seen as the farm pig and is very different from the much coveted ”Golden Pig.” It is energetically a weak year of transition. If we go back to 1959, we see it was a very yin year, but then the next year, the “Yang Metal Rat” thrust us into the cultural revolution of the sixties! END_OF_DOCUMENT_TOKEN_TO_BE_REPLACED 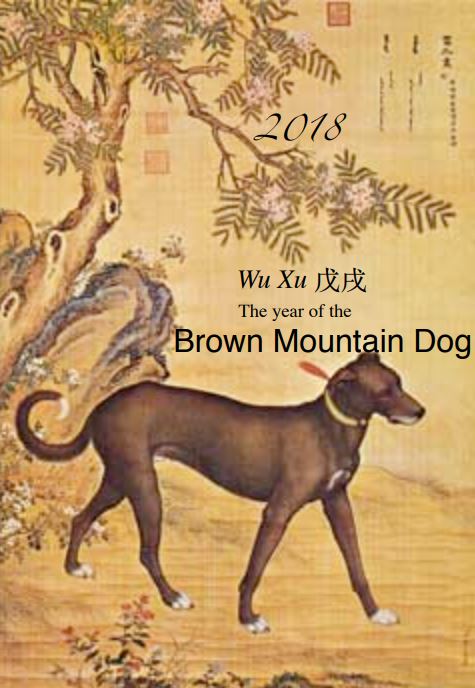 February 15th, 2018 ushers in the Year of the Male Brown Mountain Dog. This year is not ruled by a dachshund, poodle, or terrier, but by a strong, stubborn, powerful, straight-forward, tough, conservative, no nonsense Dog, who is resistant to change. The underlying elemental energies are yang earth (mountain) over the yang earth (mountain) energies of the Dog. Picture a huge fixed mountain sitting on top of another fixed mountain. These energies are extremely different from last year’s crowing and strutting Rooster.

For the last few years, the fire element has been prominent in the world. First, we had yang fire (solar), then, last year we had the yin candle fire (lunar), and this year we have the fire entering “the grave.” We will not have the exuberance of fire energies again until 2025! Starting next year, we are entering a period ruled by water and metal.

In the Four Pillars of Destiny, the Dragon and Dog are said to be the rulers of the gates to “Heaven and Hell. The Dog is related to the underground; death, spiritual, occult and conspiratorial matters. It is interesting that in Greek mythology, Cerberus the dog, guards the gate to Hades and in Egyptian mythology, Anubis the dog, guards the gate to the Duat. Garm is the name of the Norse Dog who guards the underworld gate. The dog seems to be the chosen animal to guard the gate to Hell. President Trump is a Fire Dog – something to think about! END_OF_DOCUMENT_TOKEN_TO_BE_REPLACED

Walking Through Doors Makes You Forget 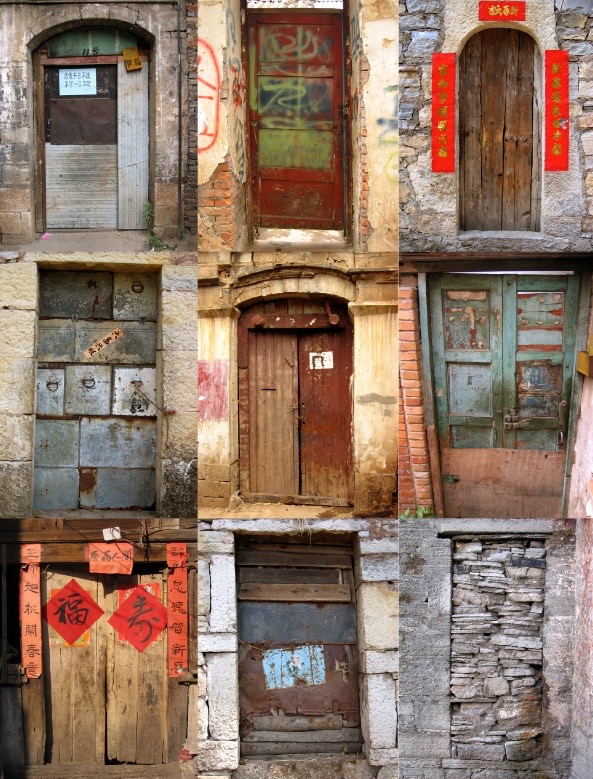 Since we have just passed through a major yearly portal, the fall equinox, I decided to revisit a really interesting newsletter article I wrote in 2014, with some new updates. In both Feng Shui and Vastu, and many other cultures, the vital importance of doorways as transitional or transformational points was always part of the wisdom teachings. The masters taught that “to enter through a doorway, you must become the doorway,” or “to enter the room, you must know how to open the door.” These are cryptic ways of saying that you must be in in resonance the threshold you are crossing in order to gain access to another dimension or reality. This concept holds true for all planes from physical to spiritual.

One of the their most amazing discoveries was that the phenomena held true whether the participants were navigating virtual worlds or real world settings! The implications of this are mind boggling to say the least. It brings to mind all of the scientific discussions currently about simulation. This knowledge has been with us from time out of mind and like so much ancient wisdom, we have just forgotten it! END_OF_DOCUMENT_TOKEN_TO_BE_REPLACED

The “Year of the Red Fire Rooster,” ushers in the explosive elemental combination of yin fire melting yin metal. Unlike the yang fire and yang metal of 2016, we are entering a more conservative yin period of structured chaos and subterfuge. Since the annual fire and metal elements of 2017 still govern bullets, guns, and explosions, domestic and international conflicts and clashes will continue.

In spite of the above, the fire rooster years are known for romance! In Chinese metaphysics, the rooster symbolizes “Peach Blossom” or the “Flower of Romance.” These energies bring intense love, passion, and seduction and are great for romance, especially in a yin fire year.

The last time we experienced a fire rooster was in 1957 (60 years ago) and it was the peak year of the baby boom phenomena. The Fire Rooster year is a very auspicious year to have a baby because both the “”Nobleman” and “Academic” stars are shining down on them. These stars bring great intellectual qualities and strong support from the people around the child.

The Chinese also see this as an ideal year to start a relationship or to get married.

Interestingly, the Chinese wear red instead of white wedding attire. They wear white to funerals. END_OF_DOCUMENT_TOKEN_TO_BE_REPLACED