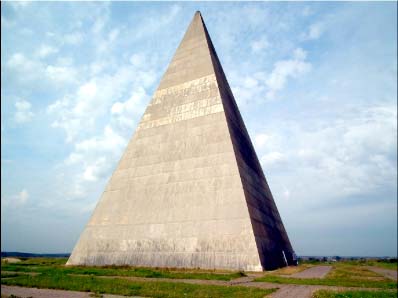 The Soviet Union fell, there was an abundance of brilliant scientists who, no longer researching weaponry, had little to do. Due to the fact that many of them already had a background of knowledge on wave technology, they decided they wanted to study pyramids Their research has shed light on the so called called“pseudoscience”that Pyramidologists spend their whole careers defending, and to the surprise of many, the Russians have given these theories credibility.

They have opened the door to a new and greater understanding of this mysterious architecture, and have gotten the wheels rolling on what could be an energetic revolution. A group of scientists from the Russian National Academy of Sciences set out to uncover what exactly pyramids are capable of. The results of their research thus far are astonishing. Since 1989, Alexander Golod has built 17 pyramids in Russia, and has lead a group of Russian and Ukrainian scientists in researching their effects [DeSalvo 117, 118]. The pyramids are made from fiberglass; they contain absolutely no metal, as predetermined by Golod due to its conductivity. Also, they are hollow inside (DeSalvo 125), and are more steeply sloping than the Great Pyramid, built at an acute 73 degree angle. The Great Pyramid was built on a 52 degree angle. END_OF_DOCUMENT_TOKEN_TO_BE_REPLACED