Year of the Triple Tiger 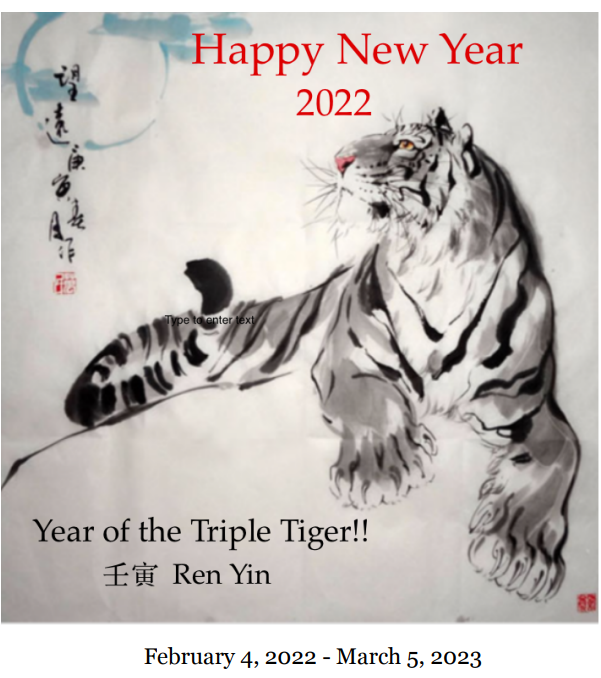 The solar calendar is used to calculate dates in Feng Shui because it is the bigger picture. It indicates when to plant crops, when to build homes etc. and is called the first day of spring.

Interestingly, this year’s Bazi chart (the four pillars astrology chart showing year, month, day and hour of birth) for February, 4, 2022 at 4:15 am (Beijing) is a Triple Tiger! This rarely happens. Here is the chart – notice all animals and elements are Yang indicating its going to be an active, vigorous, impulsive, aggressive year! And, remember the official animal symbol of Beijing is the Tiger. Guess what day the Olympics open in Beijing – February 4th – the First day of the Triple Tiger Year. We know this can not be a coincidence! 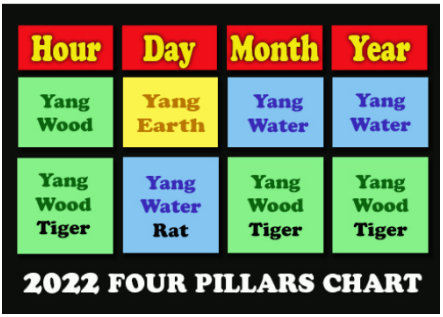 The year of the Black Water Tiger is really getting a lot of press both online and in print. Even the big retail stores are promoting lines featuring tigers and tiger prints. The last two years which were ruled by the the white metal rat and the white metal ox were not exactly the images people wanted to wear or feature in their home. Thankfully, The black water tiger energy will be forcing people everywhere out of their two year pandemic stupor.

The tiger is in the wood group according to the five element theory. He is yang wood which is out pictured by tall trees, large wooden structures or landmarks. Besides wood, the tiger this year has a little yang :ire hidden within which will bring some much needed warmth, happiness and positive energy into the world. In 2018, the Year of the Dog, :ire “entered the grave.” Since then. we have been suffering from a lack of any :ire energy. The ruling elements have been water which brings fear and metal which is a cold, harsh energy. We will have to wait until 2025, the year of the Snake for :ire to finally come out into open.

2022 is a yang water year, but at least the :ire is beginning to grow again. Yang water is like the ocean. It is an aggressive force, so there is still the tendency for conflict, tension and possible terrorist attacks. The Chinese calendar is based on a 60 year cycle, so I like to look back at was happening 60 years ago during the Kennedy administration. 1962 is remembered as the year of the Cuban Missile crisis, which almost triggered a nuclear war between the Soviet Union and the United States.

The Cold War that had been going on since the 50’s continued to worsen when the Russians placed Ballistic Missiles on Cuban land just 90 miles away from the coast of Florida and JFK called their bluff by threatening war unless they were removed.. Luckily, the crisis was averted and Khrushchev removed the missiles. One can barely believe we are in a similar state of tension today with Russia. Recently, Putin has been discussing with Cuba and Venezuela the possibility of putting missiles into their countries. Its like nothing has been learned since the last Black Water Tiger year!

In 1962, Folk music was evolving into protest music thanks to young artists like Bob Dylan and the birth of Surfing music by the Beach Boys grew in popularity. Meanwhile in England, the Beatles recorded the single “Love Me Do” and the Rollin Stones played their first gig. The new hit on TV for that year was “The Beverly Hillbillies” and the :irst of the James Bond movies “Dr No” was an instant success. Some of the other movies released included “Spartacus” and “El Cid”. Also, Andy Warhol premiered his Campbell’s soup Cans exhibit in Los Angeles on 9th July, 1962.

According to the Chinese zodiac, the Tiger is the King of beasts, and Black Tigers, in particular, are known for bringing in creativity, growth, movement and travelling. They are also known for taking risks, so this year we will see many protests and riots like happened in 1962. The one thing we have to be aware of is that Tiger years can be unpredictable and full of disruptions. It definitely will be a year to remember!

This month I am offering member specials. To those who sign up, I am offering a little gift to welcome in the New Year. I am giving your 7 personal directions for the Feng Shui stars like the lonely pillow star, the money star, the brilliant star, the consumer star etc. They are not in most Feng Shui books, or classes. After you become a member, simply email me the year of your month and birth year and I will figure out your personal directions and email them back. I am also sending a lo shu grid that has the 15 degrees clearly marked so you can make a transparency of it to place over your floor plan. This will make it easy to pinpoint the direction/location. Each month for the year you will receive all of the auspicious and inauspicious dates and times, the Feng Shui for the month and many videos on dowsing, vivaxis, feng shui and much more. The special offer is $100 for the year. I hope you can join me!

The link for membership – https://members.invisiblearchitecture.com/join/