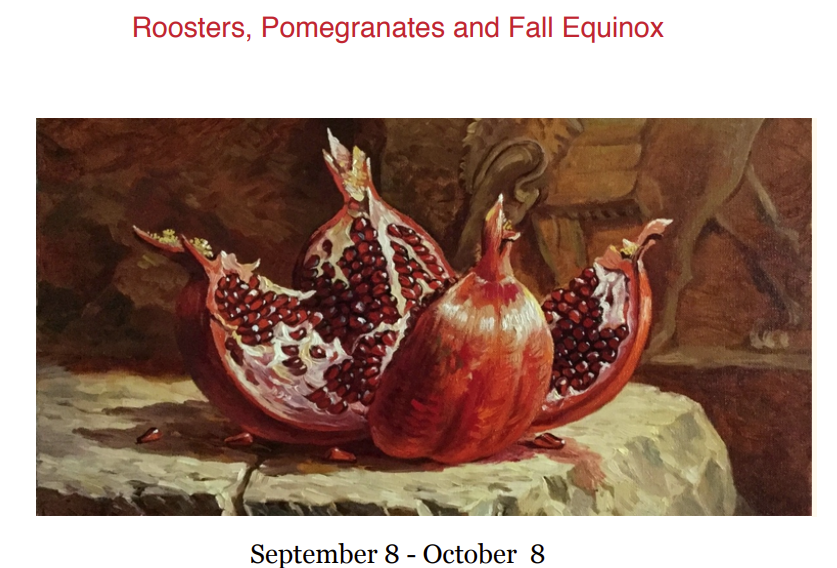 Unlike the elusive monkey who ruled last month, the September Earth Rooster likes to be the center of attention and doesn’t hesitate to say what is her mind. He is characterized by charm, flamboyance, punctuality, principled opinions, and dogmatic beliefs. Those who understand and support him are generously rewarded. Roosters have a strong evolutionary pattern that goes back millions of years. It’s believed they are the closest living relative to the ferocious and most feared dinosaur of all, Tyrannosaurus Rex! Living within this atmosphere this month, we risk becoming inflexible, righteous and defensive and need to remember this is the month of the fall equinox. It is that special time of the year where day and night are in balance. There are only two times during the year (the spring and fall equinox) where the sun rises due east and sets due west. The sun, in effect, hovers directly over the equator.

The Fall Equinox and the Spring Equinox are the two points of the yearly cycle where Lily Kolisko, the famous Steiner scientist I have written about before, found gold chloride and silver nitrate (symbolizing the sun and moon in liquid form) to be in perfect balance in her laboratory test tubes. Steiner said,” So long as substances are in a solid state, they are subject to the forces of the Earth, but as soon as they enter the liquid state, the planetary forces come into play.” This means, that solid gold, or gold salt is subject only to earthly forces, but if it is dissolved in a liquid solution, it is subject not only to the forces of earth, but also to the planetary forces of the Sun. The same is true for the moon and the other planets. This month presents us with a golden opportunity to contemplate the balance and harmony we witness in untampered areas of nature.

Recently, I visited a beautiful antique carpet store in Pasadena, and upon entering, I happened to see a large carved copper bowl with three perfect shiny pomegranates. For some reason, I Instantly knew the owner was discreetly displaying them as a symbol of his/hers mystical beliefs, especially at this time of the year. Pomegranate have long been held sacred by most of the world’s major religions, mystery schools and mythologies and are frequently equated with the fall equinox. Among many of the ancient Mysteries the pomegranate was considered to represent a divine symbol of such peculiar significance that its true explanation could not be divulged.

When I got home, I decided to do some research on pomegranates and their symbolism and was not prepared for all of the diverse information that is ready to be revealed. They can symbolize everything from the sacred blood of Christ to the “Forbidden Fruit – the fruit of love.!” Since apples are not indigenous to the Middle east, many Biblical scholars now believe it was a pomegranate and not an apple that was the forbidden fruit in the Garden of Eden.

References to them, are found dating back to Mesopotamian cuneiform, and they have been discovered in many Egyptian tombs. The pomegranate has always been a symbol of seasons and of health, having the divine power to regenerate life, and often appearing as an attribute of deities such as Ishtar, Astarte, Hera, Demeter, and the Virgin Mary. The deep red color of a pomegranate and its juice were associated with blood and the mysterious nature of the womb. The white flesh and inner kernel were associated with seeds and the mysterious nature of semen. A single pomegranate can hold between 200-1400 seeds per plant. 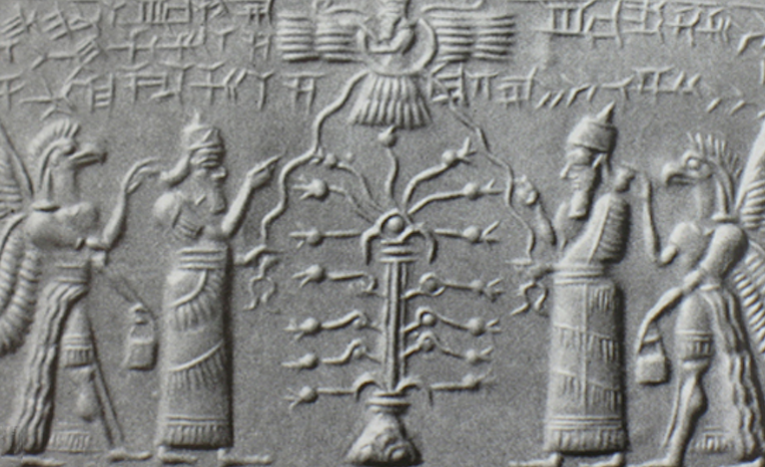 Jacob Bryant in his Ancient Mythology even notes that the ancients recognized in this fruit an appropriate emblem of the Ark of the
Deluge, which contained the seeds of the new human race. Mention of pomegranates is commonly found within the Bible, the Torah, the Koran, ancient texts and Greek mythology.

In Christianity, the pomegranate’s association with Christ’s Resurrection made it a common symbol in art in the Middle Ages. Often in Renaissance art, the Christ Child seated on His Holy Mother’s lap is shown holding a pomegranate, the symbol that prefigures Christ’s Passion and Resurrection. Once you recognize the deep significance of the pomegranate in Christianity, you will begin to see it symbolically included in the architecture of many churches! 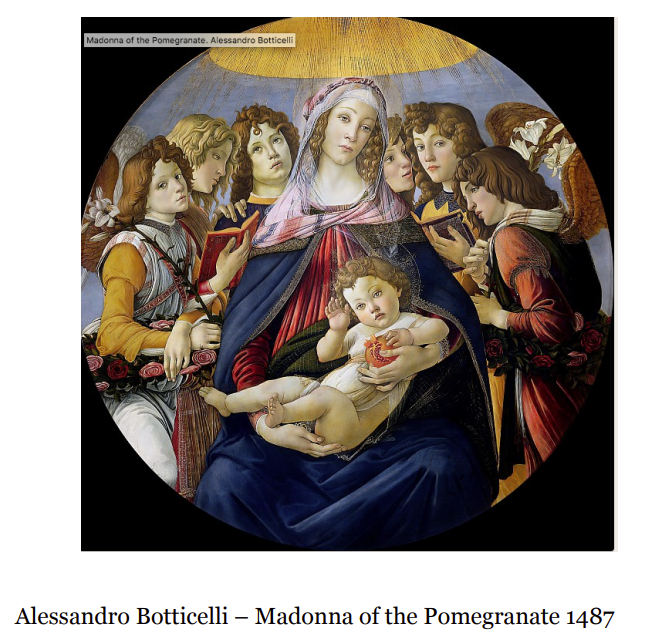 For the Hebrews, Pomegranates symbolized “the fruit of the promised land” and “the forbidden fruit of the Tree of Knowledge.” When King Solomon, oversaw the construction of Solomon’s Temple in Jerusalem he placed two pillars at the entrance to the temple, each was engraved with two-hundred pomegranates, to symbolize our duality and oneness. Boaz (left pillar) represented the feminine mysteries of the moon while Joachim (right pillar) represented the masculine energy of the sun. The Holy of Holies, which held the Ark of the Covenant, was also engraved with pomegranates. by the order of Jehovah, who also ordered pomegranates and bells to be embroidered upon the bottom of the High Priest’s robes. They were a yin yang symbol of life and death. The pomegranates signifying life and the bells, death.

The Hebrews also believed there were 613 seeds in each pomegranate which contained the 613 commandments in the Torah.

One of the most famous Greek myths that centers around the pomegranate and the Fall Equinox is that of Persephone. The Fall Equinox marks the day when Hades, god of the underworld, kidnaps Persephone (pomegranate in hand) from the surface of the Earth and takes her down into his world. Her Mother, Demeter, the Goddess of agriculture, looks everywhere for her daughter and in mourning on not being able to find her, refuses to allow anything to grow on the Earth until her daughter returns. Finally, with the help of other deities, she locates her daughter in the underworld. Hades unhappily agrees to allow Persephone to return to her mother, but only if she has not eaten anything while in the underworld. The rule of the underworld states that eating there will compel you to stay forever. Unfortunately, Persephone has eaten six pomegranate seeds which binds her to Hades. This enrages her mother Demeter, the Goddess of Harvest, who then promises to make the land bare until her daughter is returned. Zeus, Persephone’s father and Hades brother, finally strikes a deal to allow Persephone to return to her mother for six months of the year. Her return marks the start of spring (spring equinox) and the return of bountiful crops (a rebirth and resurrection of nature.)

When the fall equinox returns, she must go back to Hades. This yearly journey symbolizes the cycles of nature. Persephone represents
the vegetation which disappears in the winter only to be born anew each spring.

Besides being a super healthy food, the pomegranate is revered worldwide as a symbolic fruit, signifying beauty, love, marriage, fertility, birth, rebirth, life, death, androgny, hope, prosperity, eternity and mysteries that can’t be divulged in the Light of Day!

Wishing you a meaningful Fall Equinox!