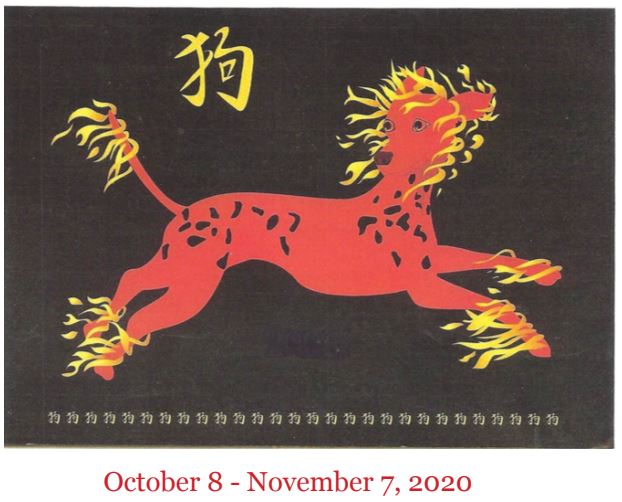 This ninth month is a yang fire dog just like Donald Trump and election day falls on a yang metal dog day! This makes for alot of yang earth (dog) energy in the upcoming US election. The dog also contains some fire, so October and early November are filled withfire energy. The fire dog energy can be very positive and exuberant, but below the surface there lies combative, angry, defiant, anxious energies. The fire dog also likes to escape into the world of fantasy. So, the energies for both Trump and the month should be very interesting, especially with his current medical condition. We have both the fantasies of halloween and the election to look forward to this month.

Joe Biden is a yang water horse. He has alot of water in the rest of his chart too. The Water energy of the Rat year tends to slow him down and dampen his usual enthusiasm. Water horses can be very emotional, also, especially this year, since his horse energy is in direct clash with that of the Metal Rat.

October is always ruled by dog energy. These Dog months tend to be unstable because we are leaving autumn and entering into the winter season. During this month, the seasonal fire element begins to die as we move into the colder, wet season of winter, so the dog month is known in Chinese astrology as “the grave of fire.” On top of this, October, is frequently called “Black October,” because the stock market usually goes through bouts of instability as the investors feel the uncertainties of the month. It is definitely a month to stay conscious and remember what is important.

Back in January, in the yearly Metal Rat newsletter, I wrote that this election year has the “Curse of Temescah.” Since we are only a few weeks away from the election, I thought it would be interesting to revisit the “curse!” Here is what I wrote –

“Knowing that 2020 is one of the election years under Tecumseh’s Curse, I suddenly realized that the 20 year curse always has Geng as the ruling element! Geng, yang metal, is represented by the sword, ax, gun, armor, weapon or money. It is the ruling element for Gregorian years ending in 0.

Tecumseh’s Curse, stems from an 1840 dispute between U.S. President William Henry Harrison and Shawnee Indian leader, Tecumseh. Some believe the curse is the reason that Harrison, and every following president who was elected in a year ending in zero, died or was prevented from serving in office. Harrison went on to be elected U.S. President in 1840, but never finished his term. He died in office of pneumonia several months after being elected.

This pattern of dying in office, or other disruptions, has continued for 20 years:

There is so much misinformation and subterfuge going about the President’s health, the election, the debates, and Covid, that it is really difficult to predict who wins!

Its a great time to do some space clearings since we have been inside for solong! The energy needs to renewed for the upcoming holiday season.

The next videos I am going to be doing for the membership are on how to determine your personal I ching energy and that of your home. We would love for you to join us!