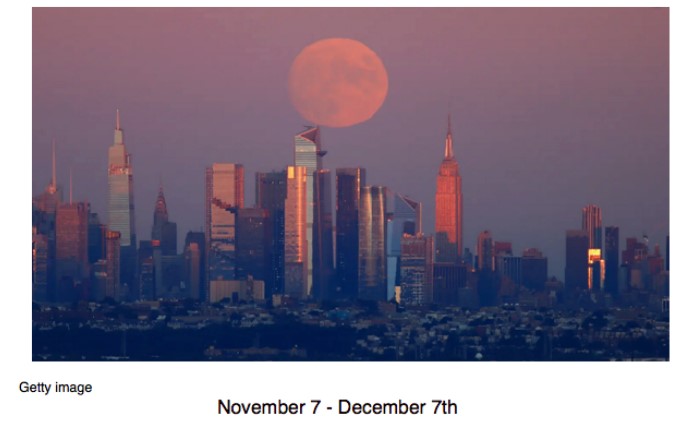 Everything seems so on edge this month. From the economy, to politics, to wars, there is chaos and pent-up anger in the air. Even the cosmos is broadcasting these energies to us! Tomorrow, November 8th is election day in the US tomorrow and it is being overshadowed by a total lunar eclipse and full moon. The full moon which usually reflects the solar rays as cool white, calming light, will be blood red. Blood moons, with their eerie copper color, bring an astrological and spiritual shift that can sometimes feel chaotic and disorienting. The Total Lunar Eclipse is a significant event because, the Earth, traveling between the Sun and Moon, disconnects and disrupts the normal monthly energetic flow. The ancients believed (through eons of observation) that this disruption can activate unexpected events and shift us out of our current cycle to new levels of consciousness. Tomorrow should be a memorable day!

The ancients knew that each planet, sun and moon were each ruled by a specific metal that linked heaven to earth – the sun (gold), Moon (silver), Mercury (mercury), Venus (copper). Mars (iron). Jupiter (tin) and Saturn (lead.). We have forgotten most of this wisdom because current science has isolated itself from the impact of the constant cosmic forces streaming in from the heavens. Luckily, we have the pioneering work of Lili Kolisko., who in her decades of qualitative scientific research on these relationships proved that a definite connection exists between specific earthly substances and heavenly bodies!

She discovered the moon and the moon sphere (the aura) were intimately interwoven with silver when it is brought into a liquid state, Through her study of silver, she found that if silver was melted and then allowed to solidify, a specific phenomenon was observed that did not occur when other metals were melted. The silver attracted oxygen out of the air when it was melted, but as it solidified, it expelled the oxygen. The molten metal began to move and splutter and developed a crater landscape – like erupted volcanoes. The solidified silver looked just like the surface of the moon!

When we think of the landscape described above, it is difficult to realize that the most remarkable quality of both the moon and silver is their affinity to light. This is the reason silver is used in photography and to make mirrors. Lily Kolisko said, “The silver acts in such a way that it represents what lives in Light, it produces picture of what acts in light. The silver behaves like the moon in the cosmos. The moon is continually reflecting the light that comes from the sun and all other planets. The moon is the great photographer of the universe! It continually brings us back pictures.”

Through further experiments, she was able to observe the effects of various phases of the moon on a silver salt solution. The process of these experiments involved placing cylinders of special filter paper into glass vessels that held measured amounts of silver salts dissolved in an acidic solution. The silver salts rose up the filter paper crystalizing into patterns that changed according to the lunar phases, seasons and planetary alignments. Through careful study she showed there is a definite rhythmical process taking place. She found each month had unique characteristics.

This is because the moon is reflecting the light of the sun in different zodiacal constellations. It is as if the silver is producing cosmic photographs. Each, day, month, and year has its own lunar signature. The silver pictures of the moon (above) are from July and August, 1927.

In Kolisko’s research, she demonstrated that everything (whether in the cosmos or on Earth) has a body and a “sphere of action ” that surrounds it. This sphere can only be accessed when solid matter is dissolved into a liquid state. As she said, “The spiritual, nonmaterial forces are not somewhere up in the clouds, They are everywhere, even here on Earth. This is the same wisdom the alchemists use in their transformation and perfection of matter. It reminds me of my favorite alchemical saying, “You must fix the volatile and volatize the fixed!

Looking at the Chinese birth year animal ( the sun sign in the western astrology) of some of the main political actors, I found that Karen Bass, who is running for LA mayor, Zelensky, and Xi are all snakes and in opposition to the monthly qi because the snake opposes the pig’s energy. Other interesting findings are Newsom is a sheep (favored this month,) and Putin is a dragon and can get along well with pig energy. President Biden being a horse is not very tolerant of the pig’s qi and has to work at compatibility.

Thankfully, the silver pig’s qi this month is known for its abundance of intelligence, peacekeeping abilities and great sense of humor. These are qualities we all need this month, especially in a Triple Black Water Tiger year!