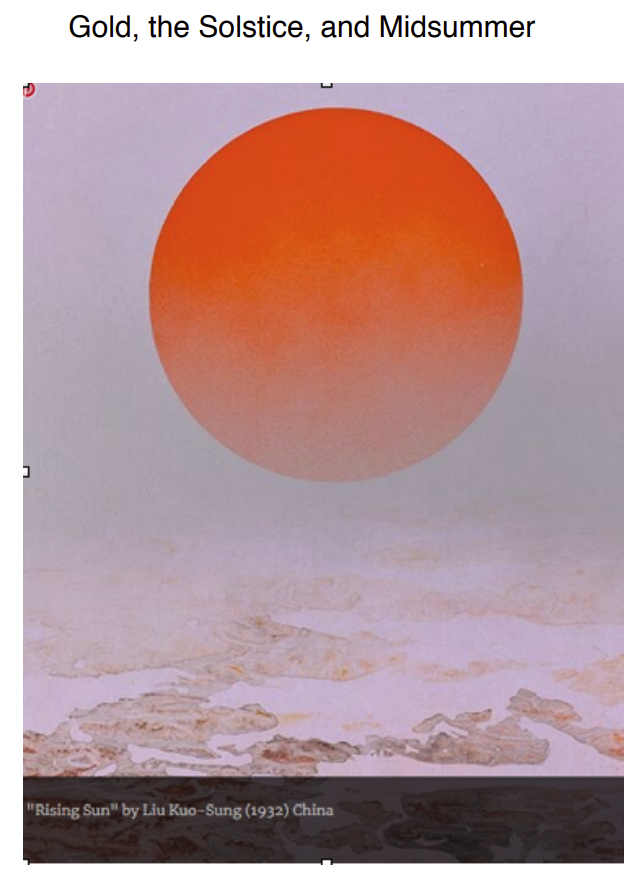 June will burst forth with the energy of a horse galloping forward at full speed, since the element of the month is fire and the horse is a fire animal! Double fire. It is said this qi combination has the ability to traverse both dark and light and is frequently symbolized as an eclipse.

Since this sign has the reputation of being solitary, self sufficient, and placing his (its a yang sign) needs at the center everything, there may be a tendency for selfishness to arise at the expense of the collective well being, especially in these uncertain times. The fire horse can also be bold and rebellious toward anyone/anything that has to do with rules and regulations. For the Fire Horse, there is little enjoyment to be found in a slow-paced life. Since the Summer Solstice is the day of ultimate yang, the double fire horse is perfectly placed!

It is a time when the world is experiencing the fullest expression of of the sun and celebrating the longest day of the year in the Northern hemisphere. On the Summer Solstice, magical rituals and ceremonies are still performed in sun temples {located on the Tropic of Cancer at 23.5 degrees) around the world to maintain the balance and harmony of nature.

For cultures worldwide, gold was the earthly symbol of the sun. It was seen as the royal metal because it was incorruptible and sacred to the solar deities. Gold symbolizes the heart and the union of heaven and earth in perfect love on all planes. Some traditions of this union, like the wedding ring, have survived. The golden ring (sun-circle) is still placed on the ring finger which is named Apollo, after the sun god!

Traditionally, most weddings took place in June (still do,) so the fruit of the union would be born in the spring – ideally!

In Kabbalistic and other hermetic teachings, the Sephiroth Tiphareth (the heart chakra) is always a golden or yellow color, not green, to indicate the deep resonance between the heart and the sun. Today, You usually find the heart colored green in most chakra charts and teachings online because they believe the heart is related to Venus. Green which is the planetary color related to copper (Venus’s metal) is the color of Netzach which rules the throat center (Taurus,)The majority of gold in the human body is located in the heart! Lily Kolisko in her great pioneering scientific work on the relationship of metals to the planets, found that gold chloride when activated by the sun on her filter paper usually crystallized in rich pictures as golden yellow, peach blossom to violet. In Feng shui, “peach blossom” is known as “the color of pure love.” Goethe like the Chinese, in his color theory, found peach blossom (same colors as Kolisko) to be the colors of the soul.

Midsummer occurs the week after the summer solstice. The celebration predates Christianity, and has existed under different
names and traditions around the world. The sun, on the solstice (meaning standing still,) is seen to be moving again. It is the peak point of the rising tide of the solar in- breath for those in the northern hemisphere – and of the out-breath for those south of the equator. June 24th is known throughout Europe as Midsummer’s Day and bonfires are lit to drive out evil forces and to renew the reproductive powers for the year. For the pagans and gypsies, it is a time to bathe “sky clad” while honoring the Sun.

The Freemasons celebrate this day as the “Festival of John the Baptist” who is seen as a bright and shining light. it is believed to be his birthday and is the first day of their New Year. June 24th was chosen to mirror the birth of Jesus, December 25th, three days after the winter solstice, when St John, the Evangelist, was born.

Freemasonry historically sees both St. John the Baptist and St. John the Evangelist as its patron saints, reveres their memory, and points to their exemplary lives in its ritualistic work, According to pagan folklore, evil spirits would appear on midsummer’s day. To ward off these evil spirits, people would wear protective garlands of herbs and flowers.

In ancient China up to today, midsummer celebrations honor the Earth, femininity, and yin. Interestingly, with the most intense yang energy of the solstice lessening and turning southward, the coming influence of the yin energies are now celebrated. This energy will gain inpower and influence until it reaches its height on the winter solstice. Honoring the balance between these two forces is extremely important in the Chinese culture. It is believed that if these cycles become out of sync, an imbalance will occur and bring catastrophes.

It’s going to be a “hot” event memorable month in this year of the Black Water Tiger.