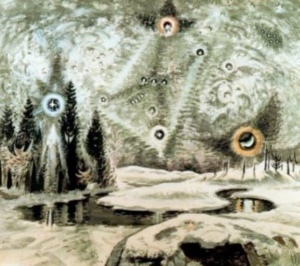 December 7 to January 7, 2022, is ruled by the White Metal Rat. The rat is seen as a very special animal because it is half yin and half yang. He is designated as such because he has four fingers (yin) in front and five toes (yang) behind. Each animal rules two hours each day.The rat hour, however, crosses two days- from 11p.m. to 1 a.m., so he contains both late night and early morning energies – ending and beginnings. Therefore, th rat is the perfect animal to rule the month of the winter solstice which see yin (darkness) dying to the darkest point of the year and then light. (yang) being reborn! Rat months are known for introducing periods of change and transformation.

During this month our physical sun is the nearest it has been all year to the Earth (northern hemisphere) and the energies of our “invisible” black sun are the farthest from the Earth! The ancients knew that our planet revolves in an elliptical pattern around the sun and every ellipse has two centers. Therefore, our visible sun forms one center, and the other center is called
“the black, invisible sun.” Each planet in our solar system creates different elliptical patterns, so there are a multitude of black invisible suns. It is strange to think that during the darkest, coldest time of the year, our physical sun is the closest! Jung was very captivated with the powerful energies emanating from these invisible suns and wrote about it in his famous “Red Book.”

During this cycle of the winter solstice, there is an ancient tradition that many cultures around the world still practice. That is the veneration of the evergreen tree, which symbolizes longevity, peace, wisdom and harmony. It also holds another gift, the pinecone. The Pinecone has long been a symbol of enlightenment and offers a beautiful example of sacred geometry. At its base, you’ll notice that its scales form a perfect Fibonacci spiral in either direction which are based on the Golden Number of Phi – 1.618. The proportions of our bodies also follow this Golden Ratio. The Fibonacci sequence is 1, 1, 2, 3, 5, 8,13,24 etc.

Esoterically, the pinecone is the symbol of the “pineal” gland which is located deep within the center of our brain, in the third ventricle. It is a very tiny gland (the size of a grain of rice). is shaped like a pinecone and has many tiny crystals within that act as transmitters for the very high-frequency light. These crystals are sometimes referred to as brain sand.
It controls the internal clocks that are affected by the movement or journey of the sun. As the daylight hours shorten, it releases the chemical melatonin, to regulate sleep and wake patterns, mood, growth development, and tissue function. It is continually monitoring the balance of light and darkness within out systems.

On a spiritual level, the pineal also rules over our consciousness and when activated together with the pituitary gland has the ability to help us awaken and transcend into a higher state of being. It enables the intuitive Third Eye which receives cosmic energies through the Crown Chakra – to link the physical world to the spiritual realms beyond time. 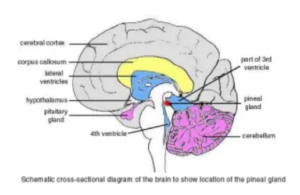 Although much has been written on the pineal, there is some mind – blowing information that was discovered by the amazing chiropractor and radionics practitioner, Ruth Drown. In the mid thirties, she developed a camera which she named RadioVision that recorded etheric photographs made from the blood crystal of a patient.

She was able with her camera and radionics machine to create black and white photographs of the inside of the human body Irregardless of the geographical distance between the Instrument and the patient. She used a drop of the patient’s blood to connect with the client and was able to photographically record the energetic patterns of the person as long as the client was alive. It was an extremely successful system of diagnosis and therapy she utilized for twenty-five years with thousands of patients. She took pictures from clients around the world and was able to diagnose both their illness and treatment. I have seen one picture taken while she was in her office in Hollywood and the patient was being operated on in Paris. She recorded the knife of the surgeon on her photograph just as the operation was taking place. You can see the knife inside of the person! When she decided to etherically photograph the pineal gland, she was presented with photos that no one had ever seen or or wrote about before.

The pictures showed that when we are born, the pineal is in an upright position for a couple of weeks. Then, it moves into a horizontal position for the rest of our lifetime, until a couple of weeks before our death. At this point, it moves back into the upright position! At both birth and death the pineal is in a vertical position. There is much wisdom to ponder here. The Pineal gland beyond monitoring the light cycles within our body is also monitoring our cycles of life and death. The intimate relationship between the winter solstice, pinecone symbolism and the pineal are real!

This week my interview guest is Scott Onstott. He is world famous for his original research, writings and videos on Sacred Geometry. In this fascinating interview, Scott gives us deeper insights into the philosophy and worldwide application of Sacred Geometry. He is the creator of the “Secrets In Plain Sight” video series, an inspiring exploration of great art, architecture, and urban design unveiling the unlikely intersection of geometry, mysticism, physics, music, astronomy, and world history. “Secrets In Plain Sight” has been seen by more than 11 million people to date. One of his videos deals with Pinecone Sacred Geometry and symbolism around the world! 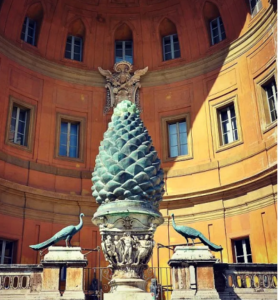 He is also the author of 14 technical books on architectural software and several more books on esoteric subjects. Scott has a degree in architecture and worked designing corporate interiors for a decade in San Francisco before becoming an independent teacher, author and filmmaker. Scott says, “Geometry is an exploration of truth, the kind that is self-evident and universal. Where there is universal truth, there is also great beauty and from this a feeling of sacredness naturally arises.”