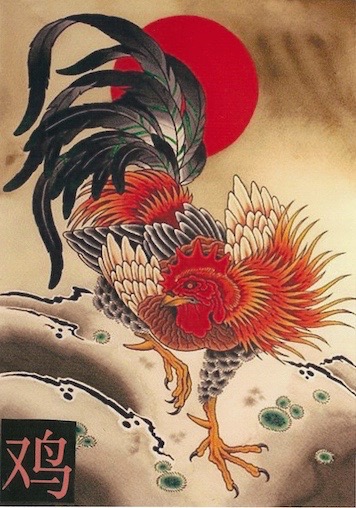 The “Year of the Red Fire Rooster,” ushers in the explosive elemental combination of yin fire melting yin metal. Unlike the yang fire and yang metal of 2016, we are entering a more conservative yin period of structured chaos and subterfuge. Since the annual fire and metal elements of 2017 still govern bullets, guns, and explosions, domestic and international conflicts and clashes will continue.

In spite of the above, the fire rooster years are known for romance! In Chinese metaphysics, the rooster symbolizes “Peach Blossom” or the “Flower of Romance.” These energies bring intense love, passion, and seduction and are great for romance, especially in a yin fire year.

The last time we experienced a fire rooster was in 1957 (60 years ago) and it was the peak year of the baby boom phenomena. The Fire Rooster year is a very auspicious year to have a baby because both the “”Nobleman” and “Academic” stars are shining down on them. These stars bring great intellectual qualities and strong support from the people around the child.

The Chinese also see this as an ideal year to start a relationship or to get married.

Interestingly, the Chinese wear red instead of white wedding attire. They wear white to funerals.

The rooster likes to strut in style, so this year will be beneficial for glamorous industries such as beauty, fashion, entertainment and music. Yin fire (the element of the year) relates to cooking and will bring prosperity to restaurants and related businesses.

Unlike the elusive monkey of 2016, the rooster likes to be the center of attention and doesn’t hesitate to say what is on his mind. He is characterized by charm, flamboyance, punctuality, principled opinions, and dogmatic beliefs. Those who understand and support him are generously rewarded.

Living within this atmosphere in 2017, we risk becoming inflexible, righteous and defensive. This is the year to really remember to “live and let live” especially in politics and religion. The people who will have the best energies this year are the ox, the snake and the dragon.

This is just a short summary to give you a general feeling for the yearly cycle. In 2018, the energies change drastically with yang earth over yang earth – a yang earth dog. This will be a trying time for Trump who is a fire dog.

Back in the politically incorrect era, Master Yang’s Avoidance Days were known as the “Killing Days!” These 13 days in 2017 are not suitable to get married, buried, move, open a new business or do anything important.

According to Chinese custom, there is a new Grand Duke of Jupiter (Tai-sui) each year who is also known as the “Minister of Time,” There are 60 such “heavenly” Grand Dukes, who rotate according to the cycles of Jupiter.. It is said, a person’s happiness, health, luck and fortune are under his watchful eyes for the year.

For 2017, the Grand Duke is General “Tang Jie” and he resides in the West 262.5 277.5 degrees. If your house faces these degrees, it is considered “clashing with the Grand Duke.” You may face accidents, obstacles or lose wealth. The cure is to minimize movements such as construction or digging in this direction and to put a talisman of the Grand Duke here. He does not like to be confronted or disturbed!!

On the other hand, if your house sits in the West and faces East, it has the support of the Grand Duke. You will do better in business ventures and competition. Historically speaking, countries at war with the Grand Duke at their back are more likely to win.

It is said that if your Zodiac animal clashes with the Tai Shui or you have inadvertently offended him, bad luck will befall you for the whole year. Every year, two of the Zodiac animals must take steps to appease the Grand Duke, because one will be facing him and one will be clashing with him. This year the winners are the rooster (west) and the rabbit (east.)

People who have the same animal sign as the Grand Duke – Fu Yin.

Sui Po or year-breaker is in the East, directly opposite the grand Duke. Sui Po generally doesn’t create any problems, until it is disturbed. By disturbance, it means renovations, repairs, construction, or digging of earth. In other words, any form of earth works is to be avoided in the East.

San Sha or 3-killings are also in the East this year (52.5-127.5) degrees. Disturbing the San Sha can cause betrayal, robbery, loss of money, injuries, illnesses and fatalities.

The degree of ill effect, however, varies – ranging from a small amount of money loss to bankruptcy or a common flu to major illness. Avoid digging, construction, or any form of earth works in the San Sha area this year. If it is absolutely essential to do renovation and repair works, then it is advisable to consult the Chinese Almanac (Tong Shu) for appropriate date selection. The ancient texts do mention that it is acceptable to have your house facing San Sha, but it is quite detrimental to sit ( back of house) on San Sha.

This is because one of the names of San Sha is Robbery Sha and robbers do have a tendency to attack from behind rather than the front of the property.

5-yellow disaster star flies to the Li palace (South) in 2017. The “5 star” is earth and as Fire produces Earth, do not put anything yellow or red or burn anything in this area – it will only make it stronger. To exhaust the Earth element, you could put salt water with coins or a traditional 5-element pagoda in this sector to weaken the earth energy of the Five Yellow. So. be very careful when you do any construction and or other movement here, especially movement of Earth.

We are in for another volatile year and the astrology charts of many world leaders are not that favorable. The two glaring exceptions are Putin and Xi Jinping. Both are entering a phase of extremely smooth luck. Let’s see how this works out!!