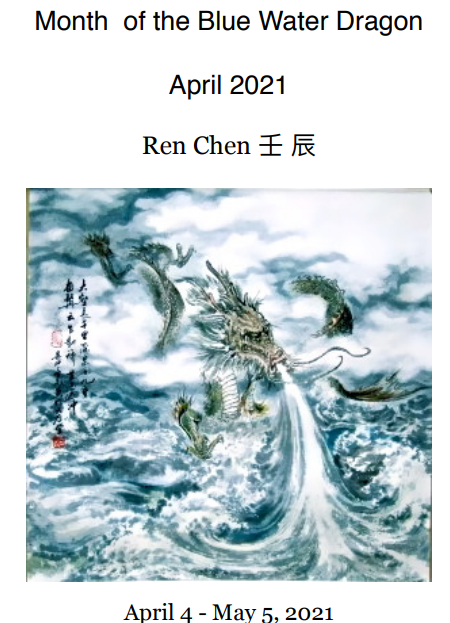 April 2021 ushers in the Blue Water Dragon. After all of the metal we have been experiencing, the water element this month should create more free movement. Water is the only element that can bypass obstacles, and find its way around whatever is blocking it. The downside of the combination of this water with the earth dragon, however, is that encourages us to just go with the flow and follow the crowd. These energies appeal to the emotions and discourage deep thinking. I think it is very important at this point in time to consciously reflect on what is real and what is programing us.

Since this is a dragon month, I decided to look up the inner elemental sound (Lap Yang – Nei Jing) of Kamala Harris since she is a Wood Dragon – known as “the dragon in a whirlpool”

Kamala Harris – “Weak Fire.”
The cryptic translation says that she is a good teacher for younger children but too fragile to be a University Professor – Not a good leader. Her fire can easily be snuffed out. She is personally very vulnerable, but will try to help when needed.

Joe Biden- “Willow Tree” – A follower.
Follows the wind – follows people with power and money. A good right hand man, second in command, Will take orders and handle anything. He is dependable. Can be a hangers on and doesn’t have his own ideas. Metal can cut down his energies.

Interesting energies for the President and Vice President of the United States!

I was recently reflecting on the unique pioneering research done by German Anthroposophical scientist Lilly Kolisko (colleague of Rudolf Steiner) and how her research like that so many other incredible scientists who don’t fit the current mainstream narrative, are just pushed aside and forgotten. I have written about her work before and have an article detailing her methods on my website if you want to know more about her work and see samples of the pictures formed on the filter paper: https://www.invisiblearchitecture.com/articles/total-solar-eclipse-working-of-the-stars-inearthly-substance/

Through thousands of daily experiments which lasted for decades, she was able to definitively demonstrate that the movements of the planets have a direct influence upon the earth and all living beings — in particular the metals to which the planets were assigned in ancient times: Gold-Sun, Silver-Moon, Mercury-Mercury, Copper-Venus, Iron-Mars, Tin-Jupiter, Lead-Saturn. She found each planet and its geometric alignments with other planets and stars left a characteristic colorful pattern on the filter paper she had placed in test tubes of a metallic solution – here on earth!

In her seminal book, “The Working of the Stars in Earthly Substances,” she wrote, “We are but a starry body within ourselves… we resonate through the rhythms of the cosmos because the rhythm of the cosmos constantly permeates our being.” Lily Kolisko

She writes: “In the case of the pictures of silver we find that the wealth of forms is so great that it is impossible to present one picture only of silver. In the case of gold, the colours are so rich that many pictures must be observed before we can realize the nature and character of the metal. The colours that make their appearance vary between pure yellow and dark violet.” These colours appeared on the filter paper even in a dark chamber, proving that light had no direct influence upon their manifestation. The pictures and colors were the most vibrant in spring and then diminished to almost nothing in December and November.

Lily did many yearly experiments with the colorful patterns formed by solstices, equinoxes, and Traditional festivals. She wrote that, “it is necessary to make all the experiments with all the various substances and their combinations, every day and every night, for many years without interruption. The Work has to be done by the same person at Easter and Christmas, at Midsummer and Michaelmas, day and night. One must dedicate oneself completely to this task. It is also obvious that these experiments can only be carried out in an attitude of devotion and reverence towards the great cosmic law.”

Since we are in the week of Easter, I wanted to present her amazing discovery abou the true date of Easter from her 1943 experiments. Since the cosmic energy is fluid, Easter is called “a movable feast” as its date changes yearly. The chosen date is the first Sunday after the Full Moon which occurs after the Spring Equinox. Many want to break with this tradition and make it a fixed date to adapt it to our present day needs, but Lily verified the need to honor the traditional time.

She wrote, “The year 1943 presented us with a very interesting problem. The Astronomer Royal and the Church held different opinions concerning the date of Easter Sunday. According to the Astronomer Royal, the first Sunday after Full Moon after the Spring Equinox fell on March 28th. That means Easter should have been early in 1943.

The Church Tradition ruled that the Full Moon which had to be considered as the Easter Moon fell a month later and therefore Easter Sunday was fixed by the Church authorities to be on April 25th, 1943. Only one of these could be right. But who could decide whether it was the Astronomer Royal or the Church authorities? It seemed a good opportunity to test our method. Were the metallic substances able to decide when Easter Sunday was celebrated in Nature, in the whole Cosmos?”

Every day she repeated her experiments. She showed that one can obtain a picture of life-force activity with solutions of minerals representing key planetary forces displaying colors & forms which reveal the invisible etheric forces working on earth. On Sunday March 28th, 1943, an extraordinary image with vivid golden, pink, mauve colors appeared. On the Church authorities’ preferred date of April 25th the pattern produced was no different than any other day. Lili Kolisko had discovered through her experiments the true cosmic reality! This day continues a long pagan tradition of celebrating the emergence of life from the darkness of winter on the first Sunday after the Full Moon which occurs after the Spring Equinox. Tomorrow, Easter is just one week after March’s full Moon (Sunday, March 28), which is the first full Moon to occur after the spring equinox (March 20, 2021) Just as it should be!