As we move more deeply into the yin side of the year, I remembered a book I read years ago entitled “In Praise of Shadows” by Junichiro Tanizaki. In the book, he explored how in the past most aspects of life in Japan were governed by shadows – the architecture, clothing, art, lighting, tea ceremony,, landscaping, and eating utensils.

It reminded me that in the northern hemisphere, we have entered the shadowy, yin part of the year and will be moving deeper and deeper into darkness until the Winter Solstice when Light will once again be reborn. In the East, yin means the shadow of the mountain, while yang means the sunny side of the mountain. Yin is dark, internal, receptive, hidden,, soft, heavy, cool, wet and in shadow. Yang is bright, external, active, exposed, lit-up, hard, light-weight, warm, and dry. 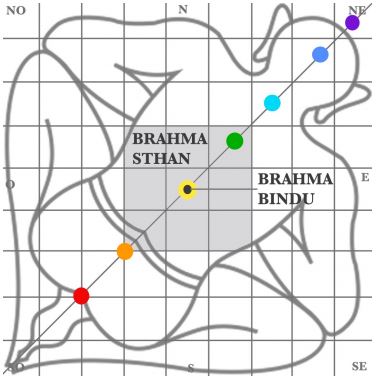 In most cultures around the world, these flows of energy from yin to yang and yang to yin are depicted by directions. During the fall and winter, light descends into darknessand rotates from the SW through the NW, until we get to the North where the darkest day of the year (the winter solstice} is experienced and then the energy flows to the NE where Light once again begins to appear. This is why the NE is called the doorway of spirit because it is the transition direction between darkness and light. The SW, which is the transition point between light and darkness is called the doorway of humanity. The diagram above from India’s Feng Shui tradition, Vastu Shastra, pictures Purusha, the “cosmic man. ” We can see the spiritual energy entering his head in the northeast and the earth entering his feet in the SW.

Typically, I find homes and temples either aligned along the NE to SW axis, or with doors in these directions to be very yin. Not surprising, the islands of Japan and their mountain ranges align in a NE to SW direction, so the thrust of a yin magnetic energy flow underlies and conditions the whole culture.

Lawrence Blair in his wonderful book, “Rhythms of Vision,” wrote that only three languages in existence create a perfect mandala when spoken into an oscilloscope – Japanese, High Hebrew and High Javanese! So, even the Japanese language is integrated into the very fabric of life.

This may be why in the past, ritual was interwoven into every aspect of daily and religious life in Japan. Religion in Japan was a wonderful mix of ideas from
Shintoism and Buddhism. Unlike in the West, religion in Japan was rarely preached. Instead it was a moral code, a way of living, almost indistinguishable from Japanese social and cultural values.

Today, of course this has all changed as globalism has spread Western ideas so widely that almost all modern cultures are, influenced by aspects of Western culture. People have become so ungrounded worldwide by wearing plastic and rubber soled shoes and synthetic clothing that they are disconnected and unconscious of both Earth and Cosmic energies.

In his masterpiece, Tanizaki reflects how in the past, “We found beauty not in the thing itself, but in the patterns of shadows, the light and the darkness, that one thing against another creates… Were it not for shadows, there would be no beauty.”

Tanizaki reflects that in the past rather than fetishizing the new and shiny, the Japanese sensibility embraced the living legacy embedded in objects that have been used and loved for generations, seeing the process of aging as something that amplifies rather than muting the material’s inherent splendor. Luster became not an attractive quality but a symbol of shallowness, a vacant lack of history.

I find the insights in this book so memorable because he reminds us how insensitive we have become to light pollution. He reflects that, “So benumbed are we nowadays by electric lights that we have become utterly insensitive to the evils of excessive illumination.” He further contemplates that, “The progressive Westerner is determined to always better his lot. From candle to oil lamp. oil lamp to gaslight, gaslight to electric light – his quest for brighter light never ceases, he spares no pain to eradicate even the minutest shadow.” The link to the book is to the left.