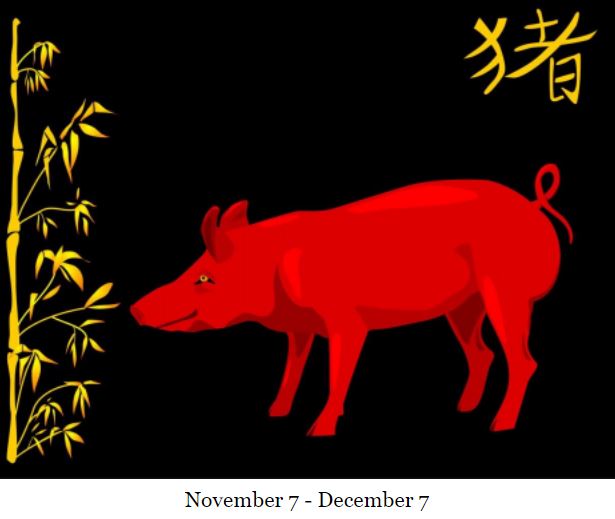 We are entering another fire month tomorrow, but it is ruled by yin fire – a flickering candle. This elemental fire energy combined with the yin water  energy of the Pig creates a more subdued and introspective month. It will  be so different from the aggressive, unstable Fire Dog energies we have just  experienced. It will be time to focus within and become consciously aware  of what really inspires you. To become aware of what is true and not let  yourself be led into self deception. Between the contentious election,

pandemic restrictions, msm propaganda, fake news and money concerns,  people are just tired of all the confusion and just.want to get on with their  lives

It is interesting to consider that Coronavirus started in the Wood Pig month  (Dec. 1. 2019) of the Muddy Pig Year, and we are still besieged by it in this  Fire Pig month – one year later!! Also, that the virus started (reportedly) in  the city of Wuhan, China. “Wu” means weapons, fighting and “han” means  man and many are claiming the virus is a bioterrorism weapon!

The winter season, ruled by the water element, is officially here. Water, the  fifth element, is seen as the low point of the matter, or the dying stage of  matter. Water is the most yin element of the five elements. Its motion is  downward and inward, and its energy is stillness and conserving. It  represents uncertainty, danger, darkness and coldness. The monthly Pig is  a water animal and the yearly Rat is also a water animal making the water  energies very strong this month and next. Next month, we get a double rat  month and year, as well as a total Solar Eclipse, the first Grand Jupiter/ Saturn conjunction in Aquarius, an air sign since 1226 and much more. It’s  good we’re getting a month to recoup!

I have written before that if we go 60 years back in time, we are in the  contentious presidential election battle between JFK and Nixon. It sounds  so errily similar to what we are experiencing today, although Nixon chose  not to contest the voting irregularities, even though Eisenhower thought he  should dispute the suspected fraud. He was only 47 and wanted to run  again and not have popular opinion against him. This election is so  different as both candidates are in their seventies and it is their last go  round.

Wikipedia gives a short summary of the 1960 election below.

When voters went to cast their ballots on November 7, the contest was  close. In the electoral college, Kennedy captured 303 votes (34 more than  was required to win), while Nixon won 219. The 14 unpledged electors in  Alabama and Mississippi and 1 pledged elector in Oklahoma cast their votes  for Sen. Harry F. Byrd, a Democrat from Virginia. Kennedy eked out a  narrow victory in the popular vote, defeating Nixon by just under 117,000  votes. Overall, Kennedy won 49.7 percent to Nixon’s 49.5  percent. Kennedy thus became the third person elected president in the  20th century without winning a majority of the popular vote. The popular  vote was the closest since 1884, when Democrat Grover Cleveland  defeated Republican James G. Blaine by only about 24,000 votes.

Citing voting irregularities in Illinois and Texas, many observers questioned  whether Kennedy had legally won those states, and some prominent  Republicans—including Eisenhower—even urged Nixon to contest the  results. He chose not to, however, declaring:

“ I could think of no worse example for nations abroad, who for the first  time were trying to put free electoral procedures into effect, than that of the  United States wrangling over the results of our presidential election, and  even suggesting that the presidency itself could be stolen by thievery at the  ballot box.”

Nixon’s supporters and critics alike, both then and later, praised him for  the dignity and unselfishness with which he handled defeat and the  suspicion that vote fraud had cost him the presidency.

This certainly puts “Tricky Dick” in a different light! There is so much  deceit and subterfuge in politics that we need to have distance from the  events to discover what really happened.