Month of the Water Horse 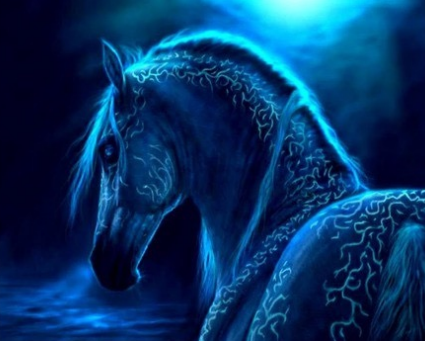 June 2020 is ruled by the Water Horse, Ren Wu, which starts June 5th and ends July 5th. The element of the month, water, brings an inner clash with the inherent fire energy of the monthly horse and on top of that the horse clashes with the yearly rat energy! We are going to see massive change and conflict this month. But, looking at our current situation, the oppositional energies seem right on target. Change does not happen in a static situation. Change comes through chaos and crisis. The Chinese see the symbol for crisis as being a combination of the signs for danger and opportunity. In the 2020 yearly newsletter, I wrote about how this year is an echo of 1960 – (the 60 year cycle of the White Metal Rat that introduces a whole new way of looking at things.) I said, politically, 1960 was a year that introduced a decade of the most tumultuous and divisive energies the United States had

ever seen, marked by the civil rights movement, the Vietnam War, antiwar protests, political assassinations and the emerging generation. President Kennedy, who was the youngest man to ever hold the office, was elected that year in a contentious battle. During his 1959 campaign, he brought in his vision of hope by saying, “In the Chinese language, the word “crisis” is composed of two characters, one representing danger and the other, opportunity. In this current time of crisis, it is important to allow this ancient wisdom to resonate. In this newsletter, I am going to explore the magic of copper – known alchemically as the “Substance of Venus.” With our current Covid situation, it is important to remember what our ancestors knew – copper kills germs, fungi and algae! With all of the toxic antibacterial soaps and lotions surrounding us, it is important to look for natural, alternative solutions. Here a really interesting article from Vice –

https://www.vice.com/en_us/article/xgqkyw/copper-destroys-viruses- and-bacteria-why-isnt-it-everywhere
Copper surfaces kill 99% of all bacteria including the super bugs found in hospitals today. This is the reason many hospitals are installing copper doorknobs and door plates. Copper is also increasingly being installed in commercial and residential heating, ventilation, and air conditioning units to inactivate air-born pathogens. Thousands of years ago the Egyptians were aware of the antibacterial effects of copper and used it in their plumbing systems. Humanity is finally reclaiming this knowledge and is increasingly installing copper piping in both their homes and businesses. An average home in America today has 469 pounds of copper in it.

Researchers at the University of South Hampton found that on a dry copper surface ecoli bacteria are eliminated within 10 minutes. On a wet copper surface, within 45 minutes. This antimicrobial property is inherent to the metal, and shared with alloys such as brass and bronze. (Brass is an alloy of copper and zinc, and bronze is an alloy of copper and tin.) This research shows that using copper based containers to store food and water is very important for our health. Also, using copper pans and utensils to cook our food reduces the risk of germs in our food. Chefs around the world know that copper pans distribute heat evenly, and cook foods faster and more thoroughly than any other material. The ancients believed that the Venusian love energies were being transmitted to whatever was being cooked! And in that vein, copper vases keep flowers fresher for longer. Another ancient practice to safely introduce copper into our bodies is to wear copper bracelets . It is believed that they alleviate the pain of both rheumatism and arthritis and wearing them also strengthens the blood and cleans the arteries. Copper coming in to contact with human skin forms chelates with the human sweat and this is absorbed into the skin. When our sweat becomes acidic through stress, green appears on the skin because the extra acid dissolves more copper than we can absorb so they are an excellent stress indicator. (This practice, long thought a placebo, has been found to have validity by many modern medical doctors and researchers.) Time to get out the copper bracelets again!

Ancient wisdom found that copper deficiency appears to contribute to premature graying of the hair. It is interesting to note that wheat grown in copper deficient soil also turns grey! Hmm… Copper has been used as currency around the world and coins were often rubbed on the forehead to reduce headaches, flu and to sterilize wounds and burns. Also, your aquarium can benefit from a couple of copper coins.

Remember to use pennies minted before 1982. Our current pennies are made of copper plated zinc!! In the field of agriculture, Victor Schauberger found copper tools and plows to be invaluable. He discovered that iron had a detrimental effect on the soil while copper increased the soil’s fertility. Copper runs in veins throughout the earth just like it flows through the veins of the human body. The strong Venusian relationship of women to copper is readily apparent in our blood. Women have approximately 20% more copper in their blood than men, while men have a higher level of iron. The red arteries are related to iron (Mars) and the blue veins to copper (Venus.) The amount of copper in a women’s blood serum has a monthly cycle which corresponds to her menstrual period. During pregnancy, copper levels almost double in the mother’s blood to support the placenta and nourish the fetus, while iron levels increase in the fetus as the birth time approaches. A woman taking the Pill blocks off her monthly rhythm of serum copper and stays at a high level corresponding to the ninth month of pregnancy.

Copper is also abundant in the female sex organs and is used up during sexual intercourse, so it needs to be replaced through diet. Some foods that contain high levels of copper are lettuce, apricots, apples, tomatoes, nuts, shell fish, grains, peas, beans, corn, garlic, sunflower seeds and walnuts.

In ancient times, there was the annual practice of the queen and king

copulating in the fields to reseed the land – they were actually re- fertilizing the earth with copper to ensure better crops. Venus is the

planet of love! Also, gallstones were believed by the ancients to be caused by lack of sexual activity. There is also a direct connection between copper and the thyroid gland. Hypo- function of the thyroid

gland lowers the available copper as does the excision of the gland. Since nuclear radiation directly affects the thyroid gland (Many around Chernobyl had their thyroid glands removed), I wonder if they tested the copper levels of Fukushima residents!! Schizophrenia, manic depression, other mental illnesses, and insomnia usually show elevated levels of copper in the blood, especially in women. Rudolph Steiner has really interesting research on this.

The symbol of Venus – a circle over a cross- came originally from the ankh in Egypt. The symbol is called “the mirror of Venus.” Our ancestors used polished copper mirrors because they reflected one’s image in the colors of radiant health. A piece of copper is warm, and friendly unlike the cold, brittle mirrors we use today which are glass coated by silver on the back. The silver grabs our energy, while the beautiful copper reflects back a healthy, positive glowing image. This seems like an apt metaphor for our current age..

One of the symbols sacred to Venus is the peacock. It reflects all of the beautiful colors of copper, especially the green. Birds that have beautiful blues and greens have an abundance of copper in their feathers.

Manley P. Hall said that the green flag of Islam shows the crescent of Venus, not the moon (because of the green color and the day of the week they have chosen as their Holy Day.) Each of the major religions has a specific day designated as it’s Holy Day. The Muslim’s Holy Day is Friday which is ruled by Freya (Nordic) who is also Venus, Astarte, Aphrodite, or Istar depending on your culture. Likewise, Judaism celebrates it’s Holy Day on Saturday (Saturn) and Christianity on Sunday (Sun.) The other days of the week (back to the seven stages of consciousness again!) are Monday (the moon), Tuesday (Mars or Tiu), Wed. (Mercury or Woden) and Thursday (Jupiter or Thor.) If you translate the days into Spanish or French, the relationship is much clearer.

The name for copper comes from “Cuprum” meaning Cyprus and it was one of the main copper mining areas in the ancient world. Venus, in ancient mythology texts, was said to be “churned forth from the frothy seas around Cyprus.” The famous painting “Birth of Venus” by Botticelli depicts Venus standing on a scallop arriving at the shores of Cyprus. The blue green waves show copper’s great affinity for water and all copper salts are sea-colored, blue and green. Scallops and other hard shelled sea creatures breathe by the means of a blood pigment rich in copper (not iron) known as haemocyanin. Venus has copper colored hair in the painting – the relationship between Venus and copper has an alchemical meaning1 This is probably more than you ever wanted to know about copper, but it is such an amazing health giving metal that I wanted t share my research! Our membership is growing and there are new articles, Auspicious Days for June, and videos. To join – https://members.invisiblearchitecture.com/join/

Hope you are staying safe!