Month of the Red Fire Rooster Ding You 定有 and The Topographical Map of your Face! 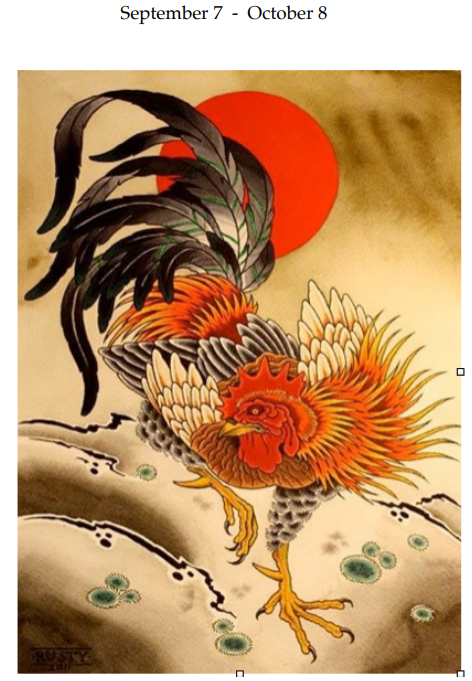 This month is a yin fire rooster. That means it is ruled by the clashing energies of yin fire (ding) melting yin metal (rooster). It is a more conservative yin period compared to last month which was ruled by yang fire and yang metal, but the conflict of the elements is still there. Ding fire is known for bringing the unseen into the light and looking beyond what the naked eye can comprehend. Many hidden agendas should be revealed this month!

Recently, while studying a topographical map for a Feng Shui consultation, I remembered all of the Chinese face reading study I did years ago, The face was looked upon as a topographical map – a living landscape of mountains, valleys and rivers. The terrain of your face provided a map of your personality, your past experiences and future potential. The shape, size and location of your features, coloration, scars, blemishes, shadows all combined to reveal your inner nature and they are constantly changing.

The ancient Chinese incorporated all of their vast wisdom into five categories called the “Five Arts.” These “Five Artsʼ are an integrated classification system that encompasses everything from mountain (knowledge and virtue), meditation, divination, medicine to physiognomy which is translated as the “science of observation,” the “science of forms,” or “the science of reading patterns.” Feng Shui, Face Reading and Palmistry are the three branches of wisdom within the Art of Physiognomy. If we look at the landscape of the face, we find there are “Five Mountains.” They are the hard yang features that are composed of bone. These mountains create the structure and the foundation of the face and represent oneʼs personality and character. Each mountain is ruled by one of the five elements (water, wood, fire, earth, or metal), and has a specific direction and location on the facial terrain.

The yin energies, which are represented by the soft tissue and features, exude fluids and are called the “Four Rivers.” They are the eyes, the ears, the mouth and the nostrils. These rivers represent the qi energy, the universal breath of life and each river has two forms, one positive and one negative. The positive qi of the eyes is expressed as Light and the negative is expelled as tears. Sound is the positive form for the ears and wax t the negative form. Breath is the positive qi of the nostrils while mucous is the negative aspect. The mouth can both take in and expel both positive and negative qi as kind words words versus critical ones and good food versus bad food!

People with large rivers and low mountains are usually very emotional, expressive and creative. They tend to have an easier life, with less struggle than those with prominent mountains and smaller rivers. Most of the time, those with strong features tend to be more independent than those with larger, softer water features.

The mountains represent the cosmic “Yang qi” of the cosmic father and the rivers the cosmic “Yin qi” of the cosmic mother. They are united at conception. This union produces your unique combination of mountains and rivers. Ideally, there should be harmony between the facial mountains and rivers, but most faces tend to be less than the ideal. The shape of our features are not static and are always changing like the topography of the Earth. We may witness a flood here, a small brush fire there, or a major tsunami across the whole face!!

In the weekly Thursday dialogues, last week’s video was delayed for a day , so please check it out. It is part 2 of dialogues with Phillip Lindsey on the Hidden History of Humanity. The research he has done on the cycles of planetary life are amazing. He has been called the “Modern Day Blavatsky” so you can imagine the depth of knowledge. He has a monthly newsletter and his website is: https://esotericastrologer.org

This week we have the esteemed astrologer, Malvin Artley. His primary focus over the years has been on bridging the sciences, of both the West and East, to discover the hidden aspects of nature. In this dialogue, Malvin presents the subjective cycles of the planets, especially Saturn. Saturn has a 9 year subjective cycle which is different from the familiar objective cycle of 7 years . He explains how this nine year cycle perfectly aligns with Chinese astrology, the bagua (which is the magic square of Saturn) and much more. This dialogue is filled with much great, original research! He also has a monthly astrology newsletter that is packed with meaningful information,

The link to the you tube channel is: https://www.youtube.com/channel/
UCEuA49356yPS-_71n1ZVsqA

Have a great autumn equinox! We need some balance!
Love and light Carol