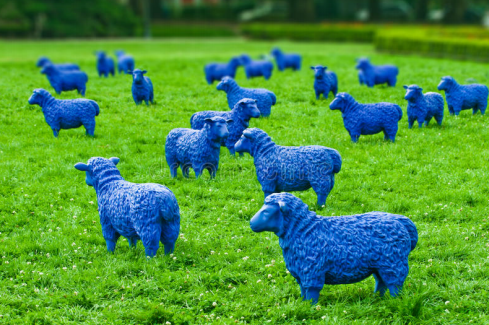 Yesterday, we entered into the Blue Water Sheep month. The contentious, clashing energies of the Water Horse are starting to wane, During Blue Water Sheep months, our emotions usually become more reflective and introspective. The sheep, being one of the most yin signs, is seen as the most creative, gentle and intuitive of all the animals. They do not like to create waves, but to quietly go along with the flow. This is a month to truly reflect on what is important.

Getting a good night’s sleep during this pandemic has been difficult for many of my friends and clients. In “normal” times, forty nine percent of Americans report difficulty in sleeping. Anxiety and stress over waking up during the night and not being able to go back to sleep, often leads to taking prescription sleeping pills etc., The pills then lead to their own problems and it is a downward spiral.

After implementing all of the Feng Shui principles such as placing the bed in a good location, having their head pointing in the right direction, taking the mirrors out of the bedroom, removing all electronics, having adequate darkness and the right colors, air, and basically balancing the qi in the bedroom, I found there were still clients who could not sleep through the night.

So, through research on this problem, I was amazed to rediscover the sleeping patterns of our ancestors. They didn’t sleep in one eight – hour chunk. That is a modern invention – a modern myth! They used to sleep in two shorter periods over a longer range.

The existence of our sleeping twice per night was first uncovered by Roger Ekirch, a professor of history at Virginia Tech. He wrote about the history of sleep in a very engaging book called “At Day’s Close: Night in Times Past.” In it, are hundreds of references scattered throughout literature, court documents, and personal papers that show the practice was common knowledge.

Ekirch found this sleeping pattern died out a around the time of the Industrial Revolution when everyone and everything became more regimented. Our ancestors practiced what is known as “first sleep” and “second sleep.” Thistwo–piece sleeping period lasted approximately twelve hours. They would go to sleep for approximately four hours and then wake up for three – four hours hours and then go back to sleep for another three to four hours. In the in between twilight hours, people would read, write, pray (religious manuals had special prayers for the mid-sleep hours,) talk, have sex or get up and go visit neighbors. The first four hours produced the deepest sleep. It was a period of unusual calmness- unlike the anxiety we experience today upon waking up at 3 three in the morning and thinking we need to get back to sleep for our physical and mental well-being!!

Two sleeps per night may have been the method of antiquity, but tendencies towards it still linger in our DNA! It may be the answer to a lot of our current health problems.