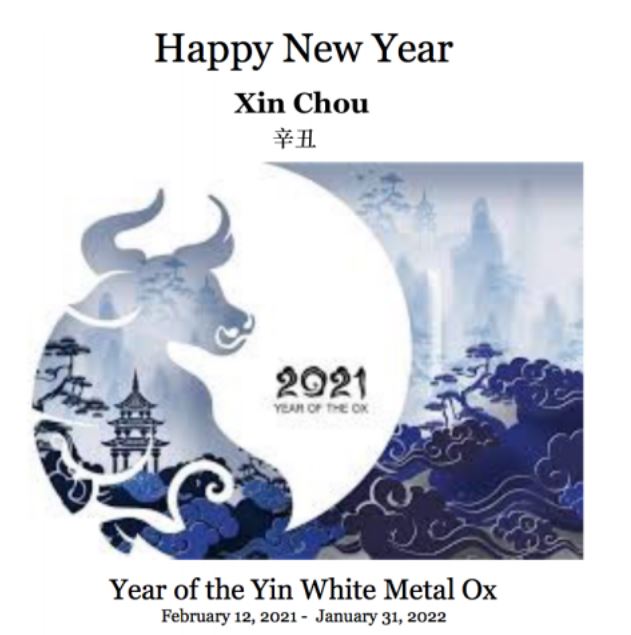 The Chinese New Year of the Yin White Metal Ox begins February 12, 2021 and ends January 31, 2022. It ushers in a new day, a new year, a new 12 year cycle, and a new 60 year cycle.After all of the chaos, confusion, lies, distortions, propaganda, and corrupted wisdom we have been bombarded with in the Year of the White Metal Rat, the quieter, grounded energy of the Ox will be a welcome relief. The Ox is also seen as stubborn, conservative, and reliable, but this mild temperament can, at times, unexpectedly go berserk. The Ox is categorized as yin earth energy, and belongs to the end of the winter season (cold barren earth.) I think that the Ox is considered a yin earth symbol because oxen are neutered bulls. When a neutered bull is
young, it is called a steer, but after three years or so, it becomes an ox. Bulls are neutered because it makes them more docile, focused and easier to control since they aren’t being distracted by those beautiful cows!

The Earthen Ox, contains inner earth, water, and metal, but no fire. Last year, the White Metal Rat also lacked inner fire. Fire brings joy, happiness, intuition, and spontaneity and we know those qualities were lacking in 2020. The yin metal element of the year (heavenly branch) sits on top of the Earthen Ox (earthly branch.) In the flow of the five elements, earth produces metal, giving energy to the Ox. This can produce a harmonious relationship, but we have to look more deeply at the qualities of yin metal to see what other energetic combination may be produced.

Yin metal is often represented by jewelry, but it can also symbolize a small metal weapon, like a dagger or a sharp needle. I found the symbolism of daggers and needles particularly interesting as 2021 will be remembered as the year of the needle! Also, as I wrote about in last year’s New Year newsletter, the Chinese calendar repeats every 60 years with smaller repeatable 20 year cycles. The 20 year election cycles that end in a 0\ like 2020, all carry the Curse of Tempscah The curse stems from an 1840 dispute between U.S. President William Harrison and Shawnee Indian leader, Tecumseh. Some believe the curse is the reason that Harrison, and every following president who was elected in a year ending in zero, were assassinated, died in office or were railroaded from serving in office..The white yin metal dagger is seen by the Chinese as as the symbol of assassinations, coup d’etats, and terrorist attacks.

Looking back 60 years to 1961, which was the last White Metal Ox year, Kennedy was inaugurated. I found some interesting relationships between him and Biden. Kennedy was the youngest president ever elected and Biden is the oldest. Kennedy’s campaign was rocked by politicians who did not want a Irish Roman Catholic as President. but he prevailed and became our first Catholic President – Biden just became the second. Not only will we have a Catholic President again, but a third of his cabinet are Catholics (first time in history) and 6 of the 9 Supreme Court Justices are too! Kennedy broke the religious taboo and opened the political door for a wider diversity of candidates. Biden likewise broke the gender taboo by choosing a female Vice President.

Worldwide, 1961 was very chaotic. We entered into serious global tensions with the USSR (Cold War) that are still echoing today with Russia being blamed for so many bogus events. We also endured the Cuban Missile Crisis and the Berlin Wall was built. These critical events brought us to the brink of nuclear war and caused many Americans to build bomb shelters. In addition to all of this, the Vietnam War was initiated in December by sending 18,000 military advisors to South Vietnam. It is interesting to note that in 1961, when all of this chaos was happening, the world’s population was half of what it is today. It has doubled in 60 years to almost 8 billion!

Space was big topic in 1961 just like it is today with our new Space Force, which is now the 6th branch of the US Armed Service (Wow the Pentagon will become a Hexagon!} There are many objectives for this program like putting astronauts on the face of both the Moon and Mars, mining valuable metals and minerals from asteroids and, of course, providing security against hostile enemies.

While doing research for this news letter, I was amazed at how many powerful leaders were born in Oxen years. Here are a few – Hitler, Obama, Napoleon, Saddam Hussein, Hirohito, Sukarno, Madeline Albright, Margaret Thacher, Malcom X, Menachem Begin, and even Pablo Escobar!

These diverse leaders show that the strong, focused oxen energy can be used in a positive way, or for negative, destructive purposes.

The metal element which is so prevalent this year and last represents the breathing organs, the nose, lungs and skin, Without fire to balance the metal, it becomes unbalanced and unhealthy This imbalance of elements, perfectly out pictures our current health situation with Covid.

Generally, this year favors the Rat, Rooster, and Snake. The Sheep which is in opposition to the Ox and the Tiger, Horse and Dog must remain vigilant throughout the year and take nothing for granted.

Overall, this year should be more grounded, less frenetic, and more focused on reality. The Ox is a logical even tempered animal unless he/she loses patience and then we may witness the inner raging bull. This scenario could play out if people start rebelling against rigid Covid restrictions, internet suppression or feeling their political, cultural beliefs are not being honored.

Now is the time for your Annual Feng Shui update, so your home or business will be aligned with the fresh new energies of 2021! We can do them in person, through Zoom or through email and the phone – Whatever is best for you.

Also, an Invisible Architecture membership provides the Auspicious and Inauspicious Dates each month, An in depth look at the monthly Feng Shui, and videos on various topics for a very low fee. We would love to have you join us!

Wishing you a prosperous and happy New Year! Carol