August 2020 – The month of the Great Wood Monkey Jia Shen 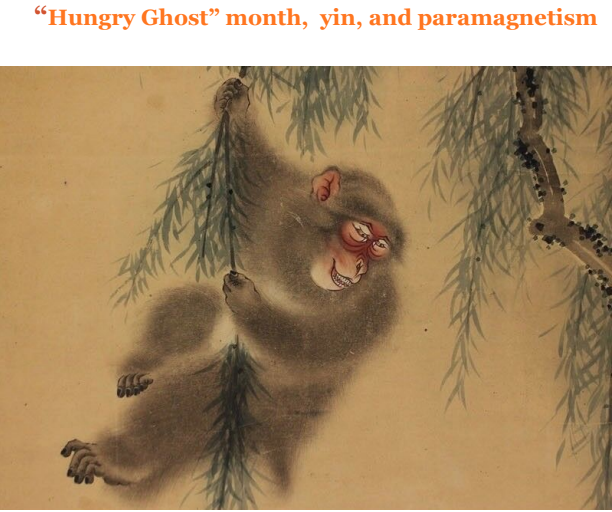 We have just entered the seventh month (Aug 7 – Sept.7) of the Chinese year, known as the month of the “Hungry Ghosts” and is seen as the lowest , yin point of the year. During this time, the gates of the lower realms are opened and the hungry ghosts are free to roam the earth in search of food, entertainment and mischief. This seems to be an accurate portrayal of the current state of our Covid world! The Hungry Ghost Festival comes at a time of year when the moon is full near the end of summer. In many ways, this festival is reminiscent of Halloween or the “Night of the Dead” in Western countries.

Cultures from Europe to China have traditional days of the dead or ghost days that are thousands of years old that were part of the tribal folk religions before the advent of Christianity in Europe and Buddhism in Asia. In Britain, Halloween originated from the traditional holiday of Celts who believed that the last day of October was “the day of the dead” or “the ghost day” when ghosts crossed over the boundary between the living and the dead. Cultures throughout Asia from India to Cambodia to Japan share similar beliefs about the August, and these traditions seem to date from before Buddha.

Celebrating the Hungry Ghost Festival is all about looking after hungry, discontented, wandering souls. These are ghosts without families to care for them or people who died because of unfortunate events like pandemics, war, murder or suicide. Families do everything they can to placate these unhappy spirits with gifts of food, money and other supplies. Though primarily intended to prevent these ghosts from causing trouble in their own lives, the customs of Ghost Month do raise a certain mindfulness about making space in our world for those who have fallen out of society. This year the actual festival day falls on September 2, 2020.

Even though the outer energy of the month is very yang – hot and dry – it is believed that the dark yin inner forces overpower this yang energy. The resulting imbalance of excess yin chi attracts ghosts and wandering spirits who thrive in such an atmosphere.

Reflecting on this phenomena, I was reminded of the importance of having a balanced yin/yang relationship in our environment. I remembered the research I did several years ago on on Phillip Callahan, the world renown ornithologist and entomologist. His work focused on soil, stones, water etc. and their magnetic quality. Paramagnetic stone is yang – slightly attracted to magnetic energy and diamagnetic stone is yin – slightly repulsed by magnetic energy. I think it’s a perfect time to revisit this valuable information.

During World War Two, while stationed in Ireland as a radio engineer, Callahan became intrigued with the 13 round towers he found in the countryside. He noticed that around the towers, the plants, grass and trees were extremely healthy and that the farmers even brought their sheep to graze around the towers. Through experimentation, he discovered the towers were paramagnetic antennaes placed in diamagnetic or low paramagnetic areas to increase the fertility of the soil. The atmosphere, rocks, stone, and soil (inorganic) tend to be paramagnetic, while plants, water and most organic forms including humans tend to be diamagnetic. The two forces work hand in hand.

Callahan found that the ancients built their round towers, pyramids, stupas, cathedrals etc. with highly paramagnetic stones like granite. He discovered that both the shape of the structure and the paramagnetic qualities of the stone worked together to imbue plants, animals and humans, the entire environment, with health and well being. He postulated that paramagnetic soils facilitated the flow of electromagnetic forces from the atmosphere to plants.

However, he began noticing that where there was low paramagnetism in the the soil, agriculture was more difficult, and there was more political strife and warfare in the region. He became fascinated by this phenomena and decided to fly to many global areas of strife (war zones like Yugoslavia) to measure the paramagnetic quality of the soil. Every “hot spot” he tested had low paramagnetic qualities as well as low readings of the Schumann magnetic resonant waves (they go hand in hand.) To test that his hypothesis was correct and it wasn’t just the mismanagement of the land or the mindless placement of human structures causing the effect, he decided to visit some headhunter tribes in the Amazon!!

In the river delta, where the soil was deep and extremely paramagnetic, he found gentle, friendly natives living, but when he traveled upstream to where there was almost no soil, just thin dirt over networks of roots, he measured very low paramagnetic energies. The natives here were extremely hostile headhunters!

These findings show how important good, healthy paramagnetic soil is to our well-being. The current use of tons of pesticides, insecticides, weed killers, and EMF towers are resulting in the destruction of our environment. Without strong paramagnetic minerals in our soil, we become ungrounded and our cultures tend to fall apart. We see this happening globally and need to change our current environmental mindset for our survival. I think during our current Covid condition, many of us are are realizing how important our health, and the health of the planet is for our survival!